The variant B of the "seated forward bend" the practitioner grasps the feet from over the toes to the soles of the feet - Paścimottānāsana.

Special note: The traditional practice sequence of Aṣṭāṅga Yoga is not as static as it is often depicted. Over time, the variants of the pose  Pa"cimottānāsana were reduced from 4 to 2. Variant B was the first to be omitted by Pattabhi Jois around 2000.

Directly from the end of Vinyāsa 9 (AYI 11) of the previous flow of movements.

Vinyāsa 8 - Exhale. Inhale:
When you come out of Vinyāsa 11 , exhale again and reach for the soles of the feet with your arms straight and the palms over the toes.

Inhale and lengthen the spine.

Coming directly from  Vinyāsa 9, you only need a single inhale for this movement.

Vinyāsa 9 - Exhale. 5 breaths:
Exhale and start to fold first from the pelvis and then complete the forward bend as you bend the elbows out to the sides.

Allow the crown of the head to grow towards the toes until your fifth exhalation.

Try this: With increasing flexibility, you can reach the hands from above the toes over the soles and reach all the way to the heels.

Traditionally, you can go straight into the flow of the next poture from here. In the AYI Method two additional Vinyāsa follow this pose.

Vinyāsa 10 - Inhale. Exhale:
Starting from the sternum, inhale and straighten the spine. When the arms are extended, exhale.

Vinyāsa 11 – Einatmung:
At the end of the exhalation, place the hands on the floor next to you and a bit forward. Pull the pelvis back and up at the same time.

In the AYI version of the traditional count, from here you flow directly into the next posture.

Effect: The seated forward bend (paścimottānāsana) in variant B intensifies the effect of variant A:  an intense stretch of the backs of the legs, and the spine continues to grow and the intervertebral discs are relieved of pressure. 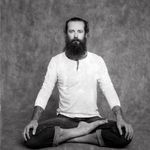 Richard Pilnick is a great photographer who exhibited his work around Europe and Asia. For Richard, photography is the doorway to different cultures and traditions, it is a moment captured, a feeling, an emotion, a silent form of communication and a...