Through the popular and ancient mantra of light, the Gayatri mantra from the Vedas, we bow to Surya – the sun – and ask for enlightenment.

Who better to ask for spiritual enlightenment than the sun itself? It provides our planet with light and life and is the brightest star in our sky. Not surprisingly is Gayatri-Mantra{m} (गायत्रीमंत्र{म्}, Gāyatrī-Maṁtra{m}) one of the most frequently recited prayers, at least in our time. Earlier, only the members of high cast were allowed access to the holy mantra, but today all devout Hindus sing in praise of the sun and ask for spiritual enlightenment. At Upanayana – the coming of age of Hindu Brahmin – boys between six and twelve are given the mantra as a daily prayer. Recitation of the mantra at dawn and dusk and at midday is a daily duty for Brahmin.Traditionally the Gayatri-Mantra{m} (गायत्रीमंत्र{म्}, Gāyatrī-Maṁtra{m}) is regarded as the mother of the Vedas“. The first lines originated from the Yajur Veda and the rest from verse 3.62.10 of the Rig Veda. The mantra also appears in the Upanishads and in the Bhagavad-Gita, where Krishna describes himself as Gayatri (10.35). The mystical greeting to the sun constitutes our very existence, strengthening spiritual energy and eliminating impurities in the soul. According to legend, the seer Vishva Mitra was the first of 24 Rishis who understood the first 24 syllables. The Goddess Gayatri is the personification of the mantra and is the wife of the creator, Brahma. 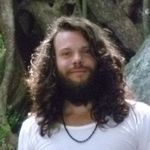