Krishnamacharya provided each of his students with their own personal mantra to be used at the start of each practice. TKV Desikachar honours Patanjali with these words and passes on the mantra on to his students.

It is this variation of the Sanskrit Mantra (मन्त्र, Mantra) which bears the closest resemblance to the Yoga-Sutra (योगसूत्र, Yoga-Sūtra) of Patanali (पतञलि, Patañali). The first two sentences of the Mantra (मन्त्र, Mantra), which differ it from the variations recited by Sri K. Pattabhi Jois or BKS Iyengar, seem almost like the beginning of the Yoga-Sutra (योगसूत्र, Yoga-Sūtra) itself. A neutral start compared to the beginning of the Sanskrit Mantra (मन्त्र, Mantra), rooted in Vaishnava Hinduism, by BKS Iyengar or the Shaiva version by Sri K. Pattabhi Jois. It fits with TKV Desikachar, who underwent a Western education and only later in his adult years rediscovered the Yoga of his father from a different perspective. 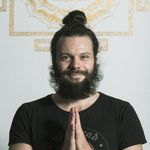